Taxing and Spending in a k-shaped world

In September we saw more data on consumer spending, transport, trade, and the labour market, which suggests very clearly that Ireland is experiencing a ‘k-shaped’ recovery from COVID-19. This means that there is a significant and growing gap between firms and households whose economic prospects have proven resilient during COVID and those which face significant falls in income and opportunity.

This phenomenon exists in most countries, but in Ireland the k-shape is accentuated. On one hand, our struggling sectors are experiencing some of the most stringent public health measures in Europe. This meant that demand in the domestic economy collapsed by one-fifth in Q2. Whilst, at the same time the fall in GDP was only one-quarter the size of the fall in employment. This is because our export model has also proven more robust than anywhere in the EU. In Q2 of this year exports in Ireland were flat, in most European countries they fell by between 10% and 40%. 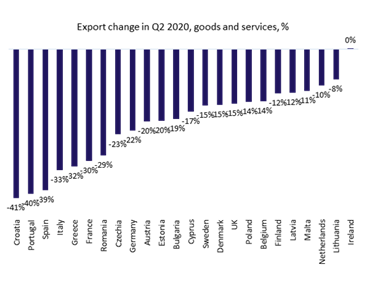 The k-shaped story of 2020 will continue for some time and applies more broadly within sectors as well as between them (more on this in our next Economic Outlook on Monday). As a result, we will end this year having experienced a much greater shock to the distribution of economic opportunity than to the size of the economic pie. In other words, while our exporting sectors will continue to generate much more income relative to our neighbour’s, employment and income in some sectors will remain severely depressed.

A minority of sectors and workers are being asked to take a significant economic hit, to keep us all safer from a public health perspective. Hospitality companies, the tourism, travel and aerospace sectors, and those in their supply chain, are doing the heavy lifting. Their disproportionally young workforce are suffering the brunt of the labour market impact.

Our health for their income.

We escaped from previous recessions using our openness to trade and people as leverage. We have a high density of companies providing complex goods and services along with free access to some of the World’s biggest markets. Our specialist sectors such as bio-pharma, med-tech, food, and high-tech services continue to provide global opportunities despite the crisis. For example, we exported more COVID related equipment in the first half of this year than any EU country, bar Germany. But this strategy of export-led growth will only succeed, for all sectors and regions, if workers in growing sectors can spend their incomes in local economies. 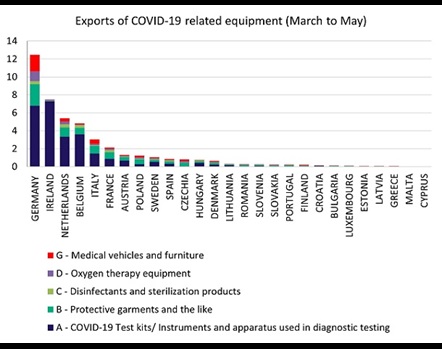 We are limiting contacts to reduce transmission of the virus, but this also reduces the opportunities people have to spend money. As a result, Irish households saved €10 billion in the first half of 2020, despite chronic unemployment. They now hold €20 billion more in Irish banks than they owe in debt. This is a turnaround from a figure of minus €70 billion in 2008.

These resources are the key difference between this recession and the last. The fact that our key exporting sectors continue to generate substantial income leaves us in a better position than most when it comes to incomes and tax revenue. The significantly improved wealth position of households compared to the last recession bolsters this. 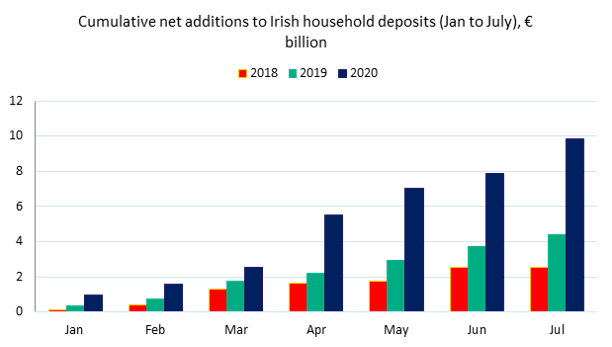 Since March, the State has played an emergency role in transmitting cash throughout the economy. As it closed sectors, to protect public health, it also stepped into the role normally played by households by spending €20 billion to support the incomes of people who lost their jobs and firms which lost their income. This is an unprecedented amount, the largest stimulus in the history of the State. Most of this support will run out by March of next year, but the tap cannot be turned off completely. A different approach will be needed in 2021, the economy is not yet ready to carry itself.

For some sectors continued emergency support will be needed, particularly in the face of Brexit. But it is also crucial that we move from an emergency mindset to something more strategic. This means focusing funds on getting people back to work and companies investing. It also requires us to take strategic investments in education, research and dealing with the key quality of life issues. We set out how in over 60 specific policy proposals in our Budget submission here.

By their nature tax revenues should increase and emergency spending fall as the economy recovers. By 2023 we reckon about €50 billion will be added to the national debt but the deficit will be closed. The State can afford this, but it has implications for how the country is governed over the coming years. February’s election and the events since have surfaced new demands. The counterfactual of what could have transpired in the last few months, had the State not put in place an expansive system of wage subsidies and income supports is obvious and awful. It also means employers and households will be more open to a European style social insurance model focused on supporting incomes in future downturns. In addition, voters have expressed preferences for further improvements in areas like housing, health, and the environment. Solving those issues is the intergenerational solidarity young people, who have lost more than most, will expect after COVID.

Where these involve ongoing expenditures, we will need to find ways to fund them. The State will be able to borrow to fund emergencies like COVID, Brexit, or for crucial infrastructure. It won’t be able to borrow further tens of billions of euro to fund ongoing current spending. The decision on how to find ways to fund new programmes into the future will require buy-in and balance. Despite the appeal of claims to the contrary, no one group will pay for it all.

Our Budget 2021 submission set out new institutional mechanisms which we think will be necessary to try and get that buy-in. They are grounded in a new social progress indicator, extensive social dialogue, an ‘investment rule’ in domestic fiscal rules, a new Commission on Taxation and Social Welfare, and short-term carbon budgets to provide a frame for our ambition. Most households and businesses will need to accept that they will have to play a role in funding these measures either through increased tax or social insurance contributions. This will also ultimately require a bigger State to deliver these objectives. That may be the real legacy of COVID. 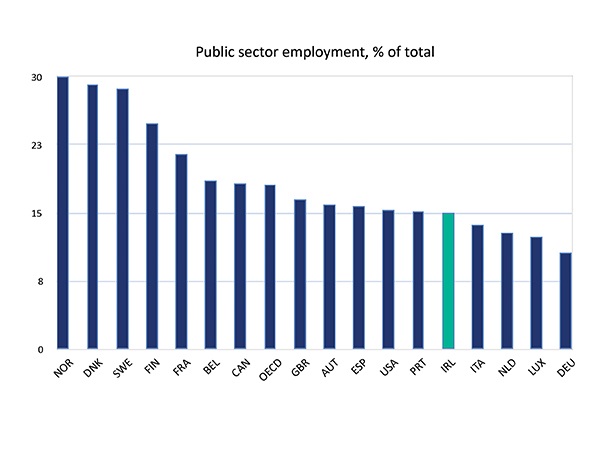