The global voice of Irish business

Dear Member,
As Irish business continues to build its global influence, I wanted to brief you on Ibec's engagement in the US last week and in Brussels this week.

Our message in the US was simple: Ireland is now a frontier economy and a global hub. A frontier economy whose transformation features international corporate balance sheet movement, record investment by business which are boosting employment, household income and public finances.

The high point in Washington DC was Ibec's corporate event, in partnership with Accenture, with over 80 companies - both US and Irish - at which we hosted guest speakers White House Adviser Gail Slater and Ireland's Attorney General Seamus Woulfe. Other highlights were representations with Congressman Richie Neal, Chair of the Ways & Means Committee, a powerful ally in a post-Brexit trade context. We also met with former Senator George Mitchell on the All Island economy. Colleagues attended the New York Stock Exchange Ireland Day in the company of many great Irish corporations who are scaling up in the USA.
On business to business, our joint briefings with Information Technology Industry Council (ITI), US Council for International Business, National Association of Manufacturers, the US Chamber of Commerce and AdvaMed highlighted the joint concerns on trade tension between the US and China and uncertainty around digital taxation for future business models. Interestingly, the disproportionate impact of Irish legislation on alcohol labelling was a significant topic raised with us as a concern on how legitimate business is treated in Ireland.

The big issues which dominated these discussions were:

1. Worries about growing protectionism globally and the threat from tariffs.
2. With the confusion of Brexit for deciding on investment into the EU, Ireland’s certainty on taxation and EU membership was seen as a differentiator.
3. Concerns on economic governance within Europe specifically on the issues of Data and Digital taxation but also on competition policy re digital technology companies.
4. Shared view that businesses both in US/EU remain committed to finding solutions through multilateral structures such as the OECD and WTO.

The Ibec Executive Director team and I were privileged to be accompanied by Ibec President Paraic Curtis, VP TE Medical, making many strong representations while building on a powerful network and providing much potential for follow up in the months ahead.

This week brought Ibec to Brussels where we hosted 300 guests, including Michel Barnier and Antonio Tajani, President of European Parliament, along with EU commissioners, MEPs from a number of member states, business and media stakeholders. Brexit and the length of extension of Article 50 is the main topic of concern. Business needs certainty but Ibec’s message is that continuous cycles of short extensions, perpetuating cliff edge brinkmanship, is in nobody’s interest. A sensible extension not just on a Withdrawal Agreement but also to get a future relationship agreed is required. This is critical so that when the necessary Transition Period commences we all know what it is we are transitioning to.
Delighted to hear your feedback as always. 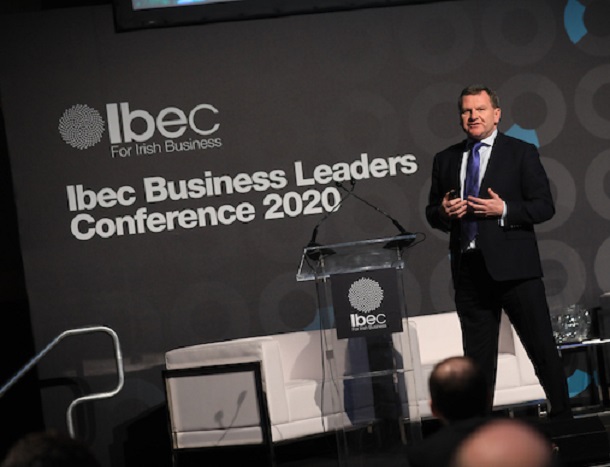